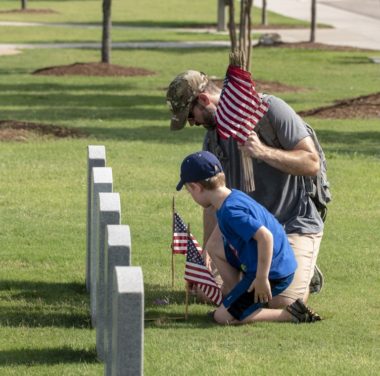 Sunday, May 27, 2018
We have 34 flag mounting volunteers representing the Reveille North Networking Group who placed American flags on the graves of veterans at the Houston National Cemetery. Over 70,000 veterans have been laid to rest at this National Cemetery. In over two hours, all flags had been placed. Quite an amazing feat and sight when it was done.

Read this tribute “Power of the Moment” written by Terry Weaver, one of our members on his experience placing flags with his son. The second image is from his article. We are so honored to have this veteran as a member.